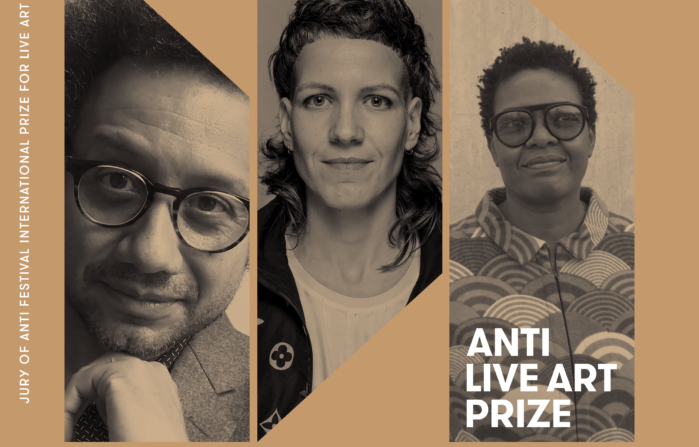 The jury for the 2022 ANTI Festival International Prize for Live Art was UK based artist, writer and curator Robin Deacon (Chair), Anna Teuwen of Kampnagel, Hamburg, Germany and Gabi Ngcobo, of the Javeet Art Center at the University of Pretoria.

The jury would like to give particular thanks to Riikka Stewen for her generosity and insight as an outside observer who joined us to provide context and precedent for our jury deliberations. Thanks also for the support given to us from Suvi, Elisa and the whole ANTI Festival team. Finally, we would like to recognise the work of the shortlisting committee in bringing to us such a remarkable range of artist practices to our attention.

The jury has had access to extensive portfolios marking the amazing journeys these artists have been on. As well as convening in Kuopio to see the works the artists have presented as part of the Shortlist Live! Programme, the jury have also spent our time at the festival in a series of fascinating dialogues with the artists. These conversations have been a real privilege, as we have been able to dig deeper into the motivations, desires and politics that drive these bodies of work.

The following are a series of brief statements about each of the artists that summarise the jury’s observations stemming from the portfolios, conversations we have had with the artists and of course, the live work itself that we have seen here in Kuopio.

“The more ancient I am, the more contemporary my work is.”

This fascinating quotation from Latai Taumoepeau represents a great summation of a practice that aims to “centre indigenous knowledge systems”. The jury was struck by how brilliantly her work engages with issues of climate change and reconstruction of ancestral place.

Many of us would have found ourselves in the town square observing Latai’s performance – Ocean, Island, Mine. The jury felt this work was representative of the best kind of a methodical, long durational practice – moving ice from one end of the square to another, but with shifts in patterns and ways of doing. This introduced a complexity in the repetitions that spoke to more than the artist’s exhaustion. This is, at its core, body centered work – what Latai has described as “doing space”.

The jury was particularly impressed with Latai’s reflections on a form of artistic engagement that can shift into broader areas of land management and social engagement. Through all our interactions with Latai’s practice, the jury had a clear sense of an artist in a unique process of rebuilding themselves and taking their practice into genuinely new and expansive directions.

Repetition, duration, exhaustion – these were the words that the jury returned to again and again when discussing Zinzi Minott’s work. Black on Black is a monumental work of sound, video and dance, speaking of hardship, perseverance and joy.  The jury were all of the opinion that the visuals of the performance were incredibly powerful, and the sonic landscape complex and impactful. We were also impressed by the overall form and the rhythm of the piece, in particular, the repeating and yet changing of images over time – like waves in the ocean. Here, we saw video, sound and body working in concert, with a clear mastery of production values and controlled glitch aesthetics.

There is a genuine sense of commitment in Zinzi’s work as an artist – this is most apparent in Fi Dem, her ongoing, episodic series of works produced and released on a yearly basis. It is clear that Zinzi is making work within and for her community, or as she puts it, with “a love of her community”.

In our conversation with Zinzi, the theme of barriers was strong – barriers for working class people, but also the struggle against racist institutions.  Zinzi raised a pertinent question in relation to her work: “how does one have agency and safety over their body?” This is a question that the jury acknowledges as speaking to the need for new structures and networks to ensure survival and sustainability within this industry. The jury recognises the particular role and responsibility of arts institutions in providing better care and support in the face of the kinds precarity and vulnerability that Zinzi described to us.

How do we categorise an artist like River Lin? Words such as ‘peer’ and ‘host’ were used in our conversations, but watching River’s captivating performance of My Body is a Queer Library in the library, the jury were struck by the careful consideration of site and the choreography and occupation of time. So, River might be seen as being a host of time.

In the conversation the jury had with River preceding the performance, we talked about how we might analyse and critique library-categorization systems – about who has the power to categorize the knowledge. The jury was excited by the breadth of topics and implications carried by the work – the architecture of libraries and how our bodies inhabit them; the library as a possible space for cruising for knowledge and for possibilities of random meetings with people who share similar interests.

In the performance itself, this was experienced through the centrality of the bodies as material that activated this usually silent space with music, dialogue, movement and playful intervention. It was strange – but also fun and refreshing – to see so much physical activity and noise in a space that is usually about thought and quiet contemplation.

Overall, the jury was delighted to observe (and participate in) River’s thoughtful and explorations of categorisation and recategorization, and to engage with the new forms of knowledge that stemmed from this process.

Breath, body and desire… to watch Liz Rosenfeld’s performance is a pleasure, a gift, a revelation. In all our interactions with this body of work, the jury was taken by Liz’s special ability to create co-presence as a caring practice. The bond between the audience and those performing was often tangible, both in the documentation and the live experience of the work. This is alongside a sense of community generated in their methods of working – a collaborative ethos is clearly central to their practice.

In conversation with the jury, Liz spoke of a pleasure in “building a body of work over your whole life.” As well as a beautifully constructed portfolio, they shared a phenomenally well written piece of text with us on the practice of cruising that was incredibly effective in the way their voice merged with, and emerged from the writing. That this kind of pleasurable melding of voice and text is central to Liz’s practice was also apparent in their performance for ANTI, I live in a house with a door.

The jury were impressed and moved by their sensual use of the body as material, that gave vivid, touching and unexpected images to seemingly unimaginable feelings. That there still remained the possibility for humour in Liz’s work was refreshing, particularly in relation to the depictions of risk and danger (both covert and overt) that have come into play in much of their work.

All of these artists are brilliant practitioners, and there has been a particular joy in getting to know them all not just as artists, but as people. But the jury was tasked with choosing one artist. So, the winner of the 2022 ANTI Festival International Prize for Live Art is Latai Taumoepeau.

The jury for the 2022 ANTI Festival International Prize for Live Art was UK based artist, writer and curator Robin Deacon (Chair), Anna Teuwen of Kampnagel, Hamburg, Germany and Gabi Ngcobo, of the Javeet Art Center at the University of Pretoria.

The jury would like to give particular thanks to Riikka Stewen for her generosity and insight as an outside observer who joined us to provide context and precedent for our jury deliberations. Thanks also for the support given to us from Suvi, Elisa and the whole ANTI Festival team. Finally, we would like to recognise the work of the shortlisting committee in bringing to us such a remarkable range of artist practices to our attention.