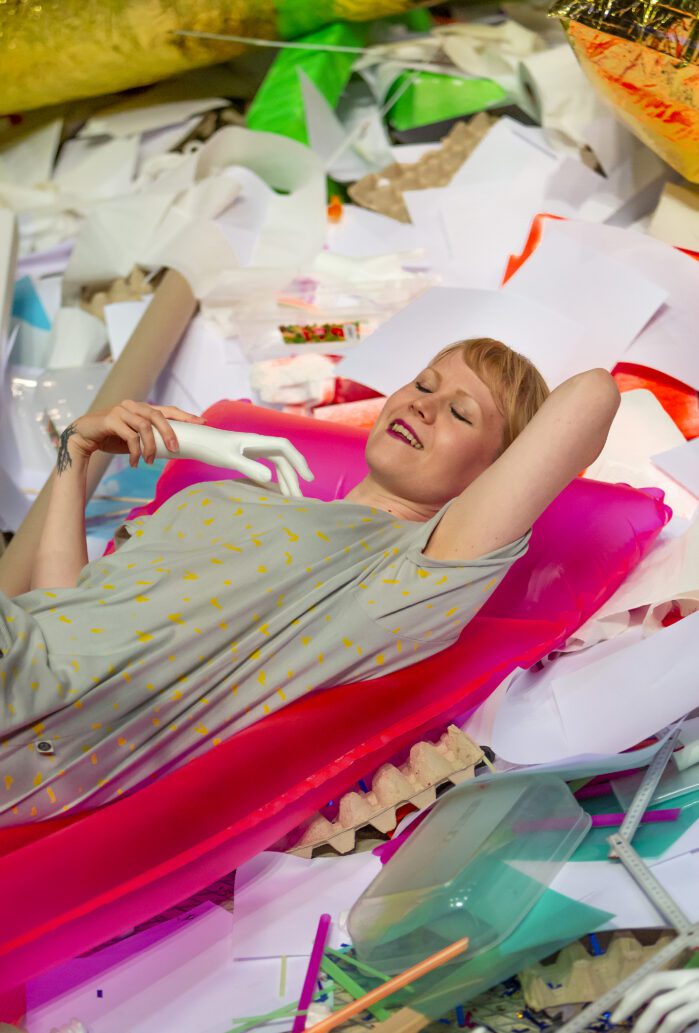 Plan your festival visit and see the daily schedule.

This year, ANTI Festival has come to a crossroads where we are starting to build something on a solid but flexible foundation that will be both a continuum for the previous work and also provide something brand new, writes Elisa Itkonen, the director – lead curator of ANTI Festival.

My journey with ANTI began in Helsinki in early 2015. I was travelling by bus to Kuopio, the city where I was born. I had applied for a position as a Festival Manager at the ANTI Festival and had been asked for a job interview. An old friend sat down next to me and I told them I was on my way to a job interview in Kuopio, even though I could not really picture myself living there. I continued that, despite all this, ANTI Festival is such a unique international event that I couldn’t help but apply to work there. So when I got the job and moved to Kuopio, I first thought that I was going to stay in the city for two or three years. But ANTI kept taking me forward, and I also did my part in taking ANTI forward. ANTI sucked me in and I’m still on that path. In April 2022, I was appointed ANTI Festival’s Managing Director and Lead Curator.

In the past year, ANTI has moved me to tears several times.

Last year, we celebrated the festival’s 20th anniversary and its success story for which the festival’s long-term Artistic Directors, Johanna Tuukkanen and Gregg Whelan, paved the way. I teared up over the appreciation, respect, joy and pride I feel for their and all our artists’ work – and for my own work and the efforts of everyone working for ANTI Festival.

We’ve known for a longer time that 2021 would mark the final year with Gregg at the helm of ANTI Festival. Johanna also left her position in autumn 2021 and moved to a new job. Johanna is one of the founders of the festival; in addition to providing artistic direction, she has also led all other operative areas at the festival. Again, I find myself in tears – tears of missing, appreciation and gratitude. I miss my long-term co-worker, supervisor and inspiration no longer being part of my daily life at work. Nevertheless, I feel happy and proud that she was selected as the City of Oulu’s Head of Cultural Services. If there’s anyone who will be able to produce a positive change in a city, it’s her.

As the successors of the festival, we were left with a platform built on a financially sustainable basis and a clear artistic concept that nevertheless enables us to keep creating new things. I cannot thank you enough, Johanna and Gregg. Your work will always be a part of the festival’s DNA.

This year, ANTI Festival has come to a crossroads where we are starting to build something on a solid but flexible foundation that will be both a continuum for the previous work and also provide something brand new. The festival programme includes some pieces that are based on long-term partnerships built by the former pair of Directors. The ANTI Festival International Prize for Live Art and Shortlist LIVE! programme form a whole that allows us to see the works of prize winners from previous years and those shortlisted this year. Over the years, dozens of people have influenced the prize and the artistic programme built around it. In 2022, nominees were selected by a shortlisting committee led by Gregg Whelan and also including Season Butler and Madeleine Flynn.

I am thrilled that I’ve been given a chance to collaborate with Bek Berger, the Artistic Director of the Homo Novus Festival, in the Festivals’ Path series. I am also thankful for and inspired by the collaboration with Hanna Parry, the Artistic Director of the Baltic Circle Festival and Asta Teräväinen, the festival’s Managing Director, as well as Artistic Directors Tom Rejström and Jonas Welander and Managing Director Inkeri Rönnberg of Hangö Teaterträff in connection with the Kulkue project and the artistic programme built around it. I would like to thank each of these colleagues as well as those discussion partners whose names I did not mention here.

So even though it may seem that ANTI Festival has just one curator right now, the practical reality is quite different. This year, my role has involved guiding a variety of approaches to form a whole that is pure ANTI. The future festival programmes will continue to be shaped by interactions with various partners. I have assembled an Advisory Board which include Season Butler and Tania El Khoury. I hope, that in the future, I’ll be able to find my own johanna or gregg as my curatorial partner.

The festival has also a new core team that began its work early this year. I’m sure you’ll be happy to learn that our new Production Manager is Suvi Koivisto, who you may remember has been serving as our Producer since 2019. Sanna Ritvanen started as the Kulkue project’s Coordinator in February, and Alli Mattila joined our team as a Communications Coordinator in March. Suvi, Sanna and Alli are important partners in discussion in my efforts to develop ANTI. I am proud and happy that ANTI will continue to be made stronger by a group of proficient, art-loving feminists.

I would also like to express my deep gratitude to the festival’s financers and other partners. We would not be able to organise the festival without the support from the Saastamoinen Foundation, City of Kuopio, Arts Promotion Centre Finland, Ministry of Education and Culture, Finnish Cultural Foundation, Kone Foundation and the European Commission. Thank you also for being part of this transition and setting your sights on the future with us.

ANTI Festival is undergoing a year of transformation. Just like the festival looking for its own, new path – while always sprawling out of any pre-defined positions – through the works selected for this year’s festival we will get on a journey. Many of the artworks also examine connections between different periods of time and use collective rituals to look for things that we still can – or find it impossible to – believe in and commit to in a world overshadowed by crises. Many of the artists presenting their work at the festival have in common a desire to look past our anthropocentric worldview and, instead, immerse themselves in a connection with plants and other non-human things. We also get to explore significant places in the festival city and dream of a Kuopio of the future.

My warmest thanks to all the artists and working groups participating in the festival. You are brilliant tour guides and the greatest company during this journey.

I often hear people say that Kuopio is completely different during the ANTI Festival than at any other time. So, Kuopio residents, you should also book a seat on this free journey full of new experiences in your own hometown. The best way to get to where it all begins is by bus, bicycle or on foot. Coming outside of the city, we recommend you take a train or bus to Kuopio whenever possible.

Welcome, and enjoy! However, you should prepare yourselves that ANTI doesn’t seem to have a terminus – this journey will be at least lively, and you may even find it turbulent in some places.

Plan your festival visit and see the daily schedule.