Hyppää sisältöön
Home/ANTIZINE/Jānis Balodis: travel notes to Kuopio for a kid soon to be born 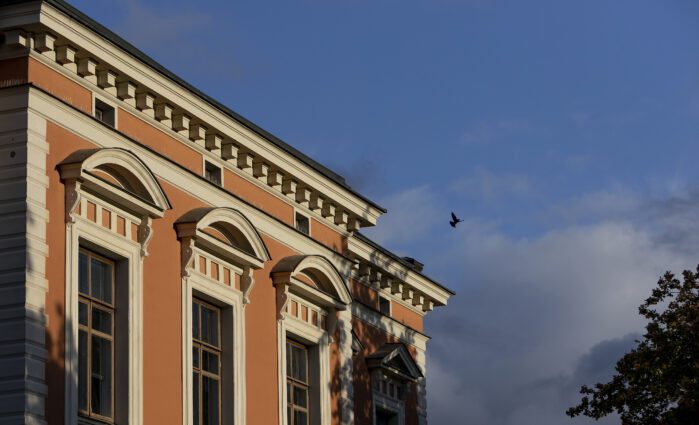 Biography of the writer


Jānis Balodis was born in 1987 in Riga when it was part of the USSR. He grew up in Riga when it was (and still is) a part of the Republic of Latvia. Back then it was a place that was very much trying to catch up on things that were absent during the 50 years of occupation, like Neo-liberal free-market capitalism and free and fair elections. He has been working in theatre professionally since 2009 as playwright, dramaturg and occasionally as a performer. Jānis is a recent graduate from DAS Theatre in the Netherlands.

Jānis Balodis travelled from Riga to Kuopio and back in July with Nahuel Cano. Balodis & Cano will perform their live work Last Night of the Deer at ANTI Festival.

In the December last year we started to wait for your arrival into this world. Since then many things have happened. On the 24th of February Russia invaded Ukraine, in the summer in some places in France people were left without tap water, on the 20th of July me and your mom got married, and after four days me and my friend and colleague Nahuel had a trip to Kuopio.

We left Riga on Sunday, 24th of July, boarded a ferry for Helsinki in Tallinn and arrived in Kuopio around 9 PM. At the end of the day we were tired and ironic, so when we both finally sat down at our apartment’s kitchen counter in Haapaniemi to eat, I said to Nahuel that this is a strange honeymoon I am having. I think your mom also enjoyed the joke, and I am curious to see what your sense of humour will be.

In fact, it might be hard to have thirteen hours in a small space with someone without observing reality and trying your best to turn it upside down just to amuse yourself and your co-pilot. Of course, there were plenty of honest and truthful moments, inspired mostly by the mixtape that we listened to. One day we can listen to Roberto Di Filippo, maybe the greatest bandoneon player, who had a habit of recording tapes of himself playing and sending to his friends. There is a tape that he sent close to his death, and it exists as an album titled “Intimo”. Of course, there is also Argentinian punk rock, Brazilian death metal, Latvian experimental electronic music pioneers from the 80ties and Kae Tempest to choose from.

If I recall correctly, we listened to Filippo near the Toivakka. A few kilometres before we were tired of the Highway E75, and decided to continue on the smaller roads. We turned right on the 618 and reached Toivakka. What does it look like? I remember that the first thing I saw was a guy coming out of the woods. He had shoulder-length hair, beard and a red flannel shirt. I couldn’t help remembering my course mate Kalle from my study time In Tampere, and our drive (again) to the sauna in November. At that time me and him tried to become screenwriters, but I also thought that he was probably secretly developing material for his stand-up show. I guess the show could have been about ice hockey, because when we passed by IKEA, he asked: “Do you know what my father’s nightmare might be?” I said I can’t imagine. “Mats Sundin driving Volvo to Ikea in Finland.” This might not make sense to you at all. It might be that the nightmares since 2011 have also changed a lot.

Later, when we turned right on E63, we saw a Shell petrol station. Me and Nahuel’s school in Amsterdam was located in a former Shell laboratories and administrative headquarters. Shell sold it to the city for one euro and built almost the same looking building a few blocks further. Now it’s not even a Dutch company anymore, because the government wanted them to pay higher taxes, so they changed their name from Royal Dutch Shell to just Shell and relocated to London. It might be that the smell of petrol is something that won’t be a part of your world soon.

At the same time – I don’t know how the cobalt smells. Around 200 kilometres from that Shell station is Outokumpu, an old copper mining town. In Kuopio we were told that cobalt was discovered there. Euro Battery Minerals who own the Varislahti project near Outokumpu are offering to bring back former liveness of the mining town at the same time reminding that at the moment only 2% of the batteries that Europe needs are produced in Europe itself.

On our last day in Kuopio I got a Minecraft pen for your sister (six different colours, she likes to draw), and as she’s not a fan of liquorice (unlike me), it was quite a challenge to find something equally interesting. I am going back to Kuopio in September. Seven years ago while working  in Kaunas I got a baby bodysuit with their basketball team Žalgiris logo for your sister. I think I will have to pass by the KalPa shop and take a look.

Jānis Balodis
playwright, dramaturg and occasionally as a performer

Biography of the writer

Jānis Balodis was born in 1987 in Riga when it was part of the USSR. He grew up in Riga when it was (and still is) a part of the Republic of Latvia. Back then it was a place that was very much trying to catch up on things that were absent during the 50 years of occupation, like Neo-liberal free-market capitalism and free and fair elections. He has been working in theatre professionally since 2009 as playwright, dramaturg and occasionally as a performer. Jānis is a recent graduate from DAS Theatre in the Netherlands.